Regional International Cooperation in the Arctic & Subarctic Zone: A View from Karelia

The Republic of Karelia is a cross-border region of the Russian Federation, which has an approximately 800 kilometer long border with a European Union country – Finland. A cross-border location has had a great impact on the development of international cooperation in the Republic of Karelia since the Soviet period, where in the mid-1960s, twin-city relations appeared. Later, in the 1980s and 1990s, twin-city relations transformed into active contacts among authorities, governmental and non-governmental organizations. The first interregional agreement was signed in 1989 with Vermont State in the USA.

Interstate economic cooperation with neighboring Finland was already reflected in the 1980s in such projects as the construction of the Kostomuksha Mining and Concentrating Complex and Kostomuksha town itself, as well as in the establishment of a wood processing complex in Pyaozerski village in the northern part of the Republic. Later, at the end of the 1990s and at the turn of the 21st century, together with Finnish partners, quite a number of joint projects were implemented. The projects were aimed at the establishment of modern manufacturing in the field of in-car electronics; border inspection posts were established alongside with visit-centers in national parks of the Republic; treatment plants were reconstructed; regular bus service was launched, and more. The interstate agreement on cooperation between Russia and Finland, concluded in 1992, had a significant influence on the character of regional cooperation betweenthe two countries. Finland’s accession to the European Union in 1995 gave the Republic of Karelia an opportunity to participate in such EU programs as TASIS, INTERREG, European Neighborhood Policy programs, and others. Scientific and technological cooperation as well as humanitarian ties being implemented through research, educational, non-commercial and public organizations have always been crucial for international integration of the Republic of Karelia. Among the regions of the European Arctic and subarctic zone, the main partners of Karelia are: the Norwegian county of Tromsø; the Swedish county of Västerbotten; and several Finnish unions of communes that concluded a range of cooperation agreements with the Republic. Bilateral forms of cooperation are well-balanced with multilateral ones like, for example, under the framework of the Barents Euro-Arctic region (BEAR), where the Republic has actively participated since its establishment in 1993. The unique nature of the Barents cooperation is justified by cooperation between central and regional levels. Karelia as well as other regions of BEAR seeks to get a maximum benefit from combining bilateral cooperation with participation in multilateral structures of BEAR adjusting its actions, if necessary and useful, with national governments.

The Republic of Karelia is not an Arctic region in its pure form. However, Karelia has specific characteristics which are inherent in most of the Arctic regions: severe climate, vulnerable environment, inaccessibility of the territory and underdeveloped transport infrastructure, low density of population, high operating costs and expenses on infrastructure. But at the same time there are new emerging opportunities due to the Arctic and growth of its role in everyday life of humanity. For instance, a high transport potential of the region: the region can function as a transit corridor to different dimension including the Arctic. At the moment the following projects are at the stage of preparation to implementation: a project to connect the Northern Sea Route to inner waters of Russia through Karelia; a project on development of land transport corridors between Ural and Europe; latitudinal transport-logistic projects and more.

Proceeding from this, institutional support of program and project activities under the framework of such structures as BEAR is extremely important for Karelia. A good example of this process is a harmonized combination of the established structures and forms of cooperation with the tools providing their functioning that was achieved within Euroregion Karelia. Euroregion Karelia was established in 2000 as an international platform aimed at improvement of cross-border ties and living standards of population. These ideas are implemented by means of the cross-border cooperation program ENPI ‘Karelia’. For the BEAR it would be useful to have its own source of financing as adjustment of the position of the regions is coming through their participation in the Barents Regional Council and profile working groups. That is why Russia, which will preside over in the Council of the BEAR for the next two years, promotes a necessity of establishment of financing tools for BEAR projects as one of its priorities. Precisely in this way the designed BEAR agenda will be able to get suitable financial support and fulfill plenty of useful and mutually beneficial initiatives with specific content.

Cooperation in the North requires also synergy of programs and projects. For example, cooperation under the framework of the BEAR can be supported by the instruments of Northern Dimension, programs of the EU, initiatives of the Nordic Council of Ministers and others. It is impossible to underestimate the experience of Karelia on this issue. For instance, JSC ‘Russian Communal Services’, The government of the Republic of Karelia, Petrozavodsk city administration, the Finnish Ministry of Environment, Nordic Environment Finance Corporation (NEFCO), Nordic Investment Bank and Northern Dimension Environmental Partnership Support Fund have joined their efforts for the implementation of the project on reconstruction of the water treatment plant in Petrozavodsk. This project will be launched quite soon. And one more hotspot, which was elaborated under the framework of environmental dimension of Barents cooperation in the 1990s, will disappear from the map of BEAR. We witness that the stronger institutions of cooperation are, the more topical and practically oriented the agenda of different cooperation forms is, more effective implementation of the project is and more sustainable the results are.

In the North, quality and development of human capital is a matter of high concern. That is why most of the programs and projects of cooperation among Northern regions have humanitarian nature. The results of work under the framework of the BEAR, Northern dimension, the EU programs are self-explanatory. We can give thousands of examples of successful cooperation in the field of ecology, culture, education, social support, public health service. Complex and cross-disciplinary approach for the implementation of these projects is especially important. Many programs have horizontal priorities in the form of youth support or support of indigenous people of the North, secure continuity at different stages of their implementation; involve a wide range of various representatives of civil society.

Evaluating the perspectives of further development of Barents cooperation, cross-border cooperation through the EU-Russia programs and other forms of cooperation in the Arctic and subarctic zones of Europe, it is important to mention that these models can gain momentum in other regions, for example in Canada. It is clear that direct copying is not acceptable. However, the strong sides of gained experience on international cooperation, for instance in Karelia, are its flexibility and backstop on different structures and forms of cooperation, effective search of instruments for their financing, combination of national and regional levels of cooperation and the most important – openness to the world and next-door neighbors.

In the current unstable political situation in international relations, the results of longstanding work made by thousands and thousands of people are being sacrificed in favor of temporary political interests. But as history has shown, cross-border cooperation is a stabilizing factor: it brings us hope for the future. As the Governor of Arkhangelsk region, Igor Orlov – who currently chairs the Barents Regional Council – said to his regional government on Tuesday September 10, 2014, developing the good interaction between people in the Barents Region is beyond big politics. “Our chairmanship of the Regional Council comes in a rather complicated geopolitical period, but that should not in any case affect our cooperation in solving common problems,” said Igor Orlov, according to a press-release from the Arkhangelsk government.

Hence, we can conclude that Russian regions/members of the BEAR share the common opinion and believe that it is impossible to ignore the results of humanitarian and economic cooperation achieved by states, their regions and citizens over the last years in the North. It is unreasonable to deny the gained experience and it is inadmissible to defeat hopes of people, associating the future with the North. Today while the importance of the Arctic for humanity is increasing, it is necessary to develop and apply the most successful models of regional international cooperation in different parts of the Arctic. This strategy will promote their prosperity and decrease their dependency on political turbulences. The Republic of Karelia is already leading the way, and will reinforce cooperation in the future with regional and circumpolar partners. 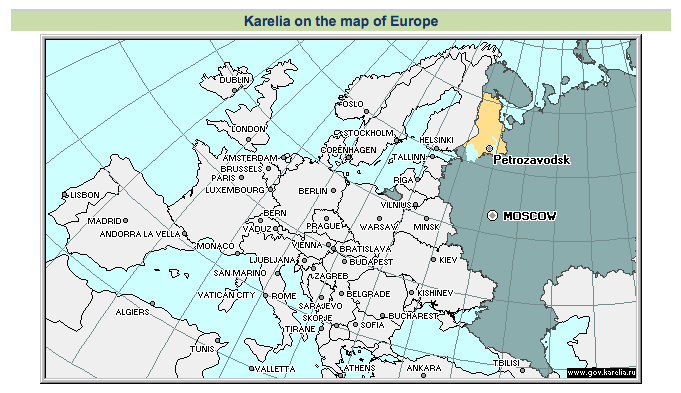