The Arctic: A New Internet Highway?

The Arctic Ocean is one of the last oceans of the planet, along with the Southern Ocean, not to be crisscrossed with fiber optical cable, information highways that carry the lion’s share of global communications. These cables are the spinal cord of the Internet and are a critical link with the rest of the world, increasingly so in our global village where instantaneous communication is expected. Today, there are nearly 300 submarine optical fiber cables on the ocean floor which carry, according to Alan Mauldin, research director at Telegeopgraphy, 99% of global communications (CNN, 2014). The remaining communications are via satellite for areas not yet connected to the global cable network. This is notably the case in the Canadian Arctic,1 where transmission is much more expensive and bandwidth much more limited as compared to optical fiber cable. In the coming years, with the melting of the polar ice and thanks to Canadian and Russian projects, Arctic residents may soon be linked to the global network and thus benefit from high-speed Internet connections. This offers great promise to northerners, especially in terms of education, health and economic development. These projects do face challenging weather conditions and require significant investment: cost estimates range from $650 million (USD) to nearly $1.9 billion.

Today, no submarine optical fiber cables lie on the Arctic Ocean floor, despite this being the shortest way to link Asia, the United States, and Europe by water, a distance of some 16,000 km. To date, ice and icebergs have sufficiently hampered navigation to make cable laying a dangerous prospect. However, the accelerated melting of the polar ice cap opens new prospects, not for raw materials or new maritime routes for commercial shipping, but for telecommunications companies to open the Northwest (NWP) and Northern Sea Route (NSR). The latter route is as much as 7000 km shorter than the NWP, which means not only less cables to lay, but also a shorter latency for communications. This latency gain is of high interest to financial institutions (Clayton, 2012), particularly those involved in high frequency trading (Morand, 2012). Russian and Canadian projects are promising latency reductions of 30%, which represents a gain of 62 milliseconds, going from the current 230 milliseconds to 168 milliseconds.2 Given that milliseconds can mean the loss or gain of millions of dollars (Anthony, 2012), there is little wonder that the new plans for Arctic cable have attracted the interest of traders.

The Arctic route has other advantages as well. Since the region has yet to be developed, there is for the moment little commercial shipping or fishing, which reduces the risk of damage to cables from anchors or fishing lines, as was the case off the coast of Egypt (Saffo, 2013). The Arctic route also avoids high-risk security areas such as the Suez Canal or the Strait of Malacca. The Arctic is seen as a stable area for development. Indeed, despite a few (managed) border disagreements between Canada and the US, and Canada and Denmark, and despite the Russian-Canadian diplomatic tensions in the context of the Ukrainian crisis in 2014, nothing today points to an armed conflict or a military crisis in the Arctic.3

In the early 2000s, Polarnet, a Russian company, was created to lay a 15,000 km fiber optic cable along the NSR. This project, named R.O.T.A.C.S. (Russian Optical Trans-Arctic Submarine Cable System) would link Tokyo to London via Terberka, Anadyr and Vladivostok.
The first phase of work is evaluated at $860 million and would connect London and Tokyo via the NSR. The second phase, evaluated at $500 would connect Russian Arctic regions to the cable. A final phase, also evaluated at $500 million, undertaken in partnership with the Russian oil company Transneft, would develop terrestrial connections to the cable in Russia. This brings the project total to $1.9 billion. According to Interfax, the R.O.T.A.C.S. is financed by the Russian oligarch Oleg Kim, already present in many sectors of the Russian economy. However, despite receiving approval from the Russian Intergovernmental Commission for Information and Communications Technologies in October 2011, and receiving financial support from the Ministry of Telecommunications in January 2013, no information is available about the status of the project (Telegeography, 2013). According to the think tank Telegeography (2014a), the cable will be in service in late 2016.

Arctic Fibre is a Canadian project that aims to lay a cable under the NWP. The implementing company, also called Arctic Fibre, is based in Toronto. The cost of the project is estimated at $650 million (Cunningham, 2014). The cable will cover 15,700 km, linking London, Tokyo and Seattle. The cable should be laid in summer 2015, using the southern NWP, and linking seven communities in Nunavut (Canada) as well as seven more in Alaska (USA). In the Canadian North, the communities targeted are Cambridge Bay4, Gjoa Haven, Taloyoak, Igloolik, Hall Beach, Cape Dorset and Iqaluit, representing 52% of Nunavut’s population. Thanks to a partnership with US-based Quintillion, of Anchorage, Alaska, Arctic Fibre will link in the Alaskan communities of Prudhoe Bay, Barrow, Wainwright, Nome, Point Hope, Kotzebue and Shemya (Dischner, 2014).

The system is scheduled to be operational by January 2016, for the Arctic segment, with the complete cable network operational by November of that year (Cunningham, 2014). The mainobjective is to link Asia, the United States, and Europe. Linking to Canada’s Arctic communities is a secondary objective, with only a few thousand households to be connected; certainly not worthy of an individual investment. For this reason, Arctic Fibre has requested a subsidy form Industry Canada to lay a supplementary cable that would link 17 additional communities in Nunavut and Nunavik, an additional investment of $237 million (CAN). With this addition, 98% of Nunavut and Nunavik communities will be connected (Arctic Fibre, 2013). Most of the financing for this project is however from the private sector, with financial institutions and international telecommunications companies playing a leading role. No public financing has been announced to date.

Arctic Fibre’s President, Douglas Cunningham, regularly advocates for his company’s cable link that would offer, according to him, reliable, rapid communications with virtually unlimited bandwidth availability at a much more attractive price for northern communities than the Telesat Canada’s satellite service in Nunavut and Nunavik. For the moment, satellite is the only alternative for Internet there. Moreover, in August 2014, Industry Canada confirmed that it will extend Telesat’s broadband subsidies through 2021, pledging $50 million to prevent Arctic internet services from collapsing (Nunatsiaqonline, 2014).

Later that month, Prime Minister Harper announced that it would upgrade Internet connectivity in Nunavut and Nunavik as part of Ottawa’s $305 million dollars ‘Connecting Canadians’ program (Prime Minister of Canada Stephen Harper, 2014). While these investments are necessary to insure continued communications services in the North, Arctic Fibre’s president Douglas Cunningham is concerned. If the Harper Government continues to prefer satellite communications, his Internet services are jeopardized. In his view, if Ottawa refuses to utilize his submarine broadband services, it is impossible to make his project economically viable since without any public financial support there will be no significant client to sustain such services (Press, 2014).

The Ivaluk Network project was announced in January 2014, designed and to be implemented by the Canadian company Nuvitik Communication. Led by a former federal civil servant, the cable project is different from the two previously described, as it aims only to serve the needs of Northern Canadians, with a focus on Nunavut and Nunavik, and a planned extension towards the Northwest Territories (Nuvitik Communications, 2014). This future cable plans to connect 26 communities in Nunavut and 14 in Nunavik. The cable should be laid in the coming years, forming a loop of 8000 km, linking James Bay, Ungava Bay, Hudson Bay, Hudson Strait, Baffin Bay, Davis Strait and part of the NWP. They offer high-speed Internet connections at competitive rates compared to satellites. 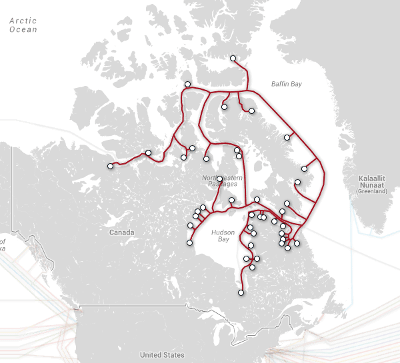 A Catalyst to Initiate Northern Development?

Arctic regions, including the Far North of Canada, have limited infrastructure, making economic development challenging at best, and always costly. Transport costs are higher than elsewhere and reliable communications do not exist due to meteorological conditions. Internet connectivity could give these regions the boost they need to kick-start development, attracting investors and initiating broader development.

Table 1: Summary of submarine fiber optic cables for the Arctic

Several recent examples from circumpolar states show that this hypothesis bears out over time. High-speed connectivity can be a critical factor for development, given that they have other assets to attract investors already. Iceland is a good example, with the reconversion of the former NATO base in Reykjanesbaern to a data center for Verne Global and Colt (Pialot, 2012). Hydraulic and geothermal power5 provide renewable energy, the Arctic climate provides fresh air and a high-speed connection via several submarine optical fiber cables. The upcoming Emerald Express cable (end of 2014) will enhance Iceland’s connectivity since it will be directly connected to North America via New York, and to Europe via Ireland.6 These competitive advantages may attract other companies, especially when one considers that Iceland has a lower cost of power per megawatt/hour than in Europe, at 38 euros versus 42 euros in France (Godeluck, 2012). Finland offers yet another example with Google’s investments, where the internet giant set up servers in an old factory. Facebook has chosen to invest in Sweden with a similar server site, a total surface area of 84,000m² (Clairet, 2012).The combination of a cold climate (requiring less air conditioning for servers) and quasi-infinite renewable energy, as well as submarine optical fibers cables, has been crucial to incite large business to set up shop in the north. However, the Arctic regions in Canada, Alaska and Russia do not offer the same potential for renewable energy. They do have large hydrocarbon reserves, which may serve as an initial replacement for green energy.

Despite the success of laying a cable in the famed Iceberg Alley between Greenland and Canada in 2009, there is still some uncertainty about the feasibility of projects crossing the entire Arctic. While cables have been laid since the early 20th century in both Atlantic and Pacific Oceans, such an endeavor has never been accomplished in the icy waters of the Arctic where the actual ice and the short window of operations to install (or maintain) the cables are obvious challenges. The climate may be a serious obstacle, both for laying and repairs. For now, the Arctic is only ice-free three months a year, in the summer. Even during this period, ice can block ships from entering and/or transiting the NWP, as was the case in 2013 when the ice pack did not recede as expected (in late summer 2014 the opening of the NSR in Russia was delayed due to ice conditions which affected all economic activities in the region). It does appear that existing projects have incorporated such variability risks. If current planning holds, 2016 will be a crucial year, with three new optical fiber cables being inaugurated in the NSR and NWP. They will link the three continents of the Northern hemisphere (America, Europe and Asia) but also the indigenous communities of Nunavut and Nunavik in Canada, and others in Russia and Alaska (USA). These populations will have better access to vital services such as tele-health and tele-education, improving their quality of life and possibly opening up greater economic possibilities. With technological advancements and the arrival of high-speed Internet, future Arctic shipping routes could even one take advantage of these submarine cables to establish a network of various reliable on-land communication services.
As a result of climate change and thawing sea-ice, “the last frontier” appears attractive and increasingly open to innovative projects like the ones mentioned above. These projects are major drivers that will continue to further the Arctic into globalization. An emerging Internet highway through the Arctic waters is definitely a clear example of this new reality.