Arctic Shipping: An Analysis of the 2013 Northern Sea Route Season

The 2013 shipping season on the Northern Sea Route (NSR) commenced on June 28 when the Russian-flagged vessel Varzuga, carrying 13,658 tons of diesel entered the NSR at Cape Zhelaniya north of Novaya Zemlya.1 Over the course of 154 days a total of 49 vessels transported 1.35 million tons of cargo. A further 22 vessels transited the NSR unladen carrying 507,000 tons of ballast. The shipping season concluded on November 28 when the Russianflagged vessel Bukhta Slavyanka exited the NSR at Cape Dezhnev in the Bering Strait. Traffic on the NSR connected ports as far west as Ammassalik (Greenland) and as far east as Vancouver (Canada). In total, vessels traveling along the NSR called at 47 ports in 14 countries. The port of Murmansk (Russia) represented the key hub for shipping on the NSR with 24 vessels, carrying 492,000 tons of cargo, either departing or arriving here. The port of Pevek (Russia) located near the eastern entrance of the NSR, counted 18 vessels with a total of 311,000 tons of cargo. Other important ports were Rotterdam (Netherlands), Mongstad and Hammerfest (Norway) in Europe accounting for six ships and 408,000 tons. In Asia, the ports of Yosu and Ulsan (South Korea) and Chiba (Japan) totalled six ships and 421,000 tons. About 286,000 tons of cargo, representing 21 percent of traffic departed from or arrived in Chinese ports.

Not All Transits are Equal

Russian law defines the NSR as the sea route between Kara Gate and Cape Zhelaniya at the tips of Novaya Zemlya in the west and Cape Dezhnev in the Bering Strait in the east. According to this definition Yugorski Shar in the west and Cape Shmidt in the east represent the entrance and exit ports to the NSR. The Northern Sea Route Information Office lists 71 transits for 2013 but a closer analysis of the data shows that only 41 vessels traveled the entire length of the NSR and qualify as true transits. An additional 23 vessels either departed from or arrived at ports inside the NSR and did not fully transit it. A further seven vessels traveled exclusively within the NSR. Of the 41 ships that transited the full length only 30 carried cargo, transporting 1.19 million tons.

The first full transit of 2013 began on July 3, when the Nordic Orion entered the NSR at Cape Zhelaniy traveling from Murmansk to Lanshan (China) with 66,000 tons of iron ore. The transit shipping season concluded on October 28, when the Nordic Odyssey, carrying 73,500 tons of coal from Vancouver (Canada) to Pori (Finland), left the NSR via Cape Zhelaniya.

Oil products, including diesel, fuel oil, and naphtha, made up the lion’s share of cargo on the NSR in 2013. In total 31 vessels carried 911,000 tons of oil products representing 67 percent of all cargo. The flow of oil products was predominantly eastbound with 23 vessels carrying 589,000 tons traveling from Europe to Asia and 8 vessels transporting 323,000 tons moving westbound from Asia to Europe. Key ports for oil products were Rotterdam, Mongstad and Murmansk in Europe and Yosu and Busan in Asia. Out of 31 vessels delivering oil products, 11 vessels supplied local communities and ports along the NSR. Only 17 vessels transited the full NSR and transported oil products from Europe to Asia or vice versa. The prevalence of vessels supplying local communities helps to explain the small vessel size. On average ships carried less than 30,000 tons of oil products. Only eight ships carried more than 50,000
tons, the largest one being the Propontis transporting 109,000 tons of gas oil from Ulsan (South Korea) to Skagen (Denmark). Vessels carrying oil products spent an average of 14.7 days on the NSR. 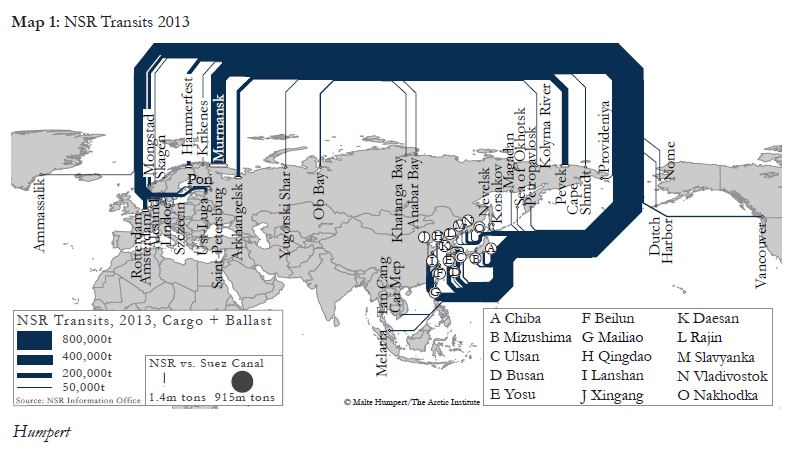 Iron ore accounted for 203,000 tons representing 15 percent of all cargo in 2013. Three vessels, the NS Yakutia, the Nordic Orion and the Nordic Odyssey departed from the port of Murmansk delivering between 66,000 and 70,000 tons of iron ore each to the ports of Lanshan and Qingdao (China). The Nordic Orion departed Murmansk on July 1 and had to contend with medium to heavy ice conditions reducing its average speed along the NSR to only 5.4 knots. It took almost 20 days for the Orion to transit the NSR. The Nordic Odyssey and the NS Yakutia left port on August 11 and September 21 respectively and were able to take advantage of improved ice conditions. They traversed the NSR in 10.8 and 12.9 days respectively.

General Cargo, also called break bulk cargo, accounted for 7.4 percent of goods on the NSR. General cargo is carried in bags, boxes, crates or barrels rather than in inter-modal containers. Thirteen vessels, including the much-publicized Yong Sheng owned by COSCO Shipping, transported 100,000 tons of these goods. Two ships, the Nordic Bothnia and the Yong Sheng, accounted for more than half of all general cargo. The Bothnia departed Xingang (China) on September 22 bound for Amsterdam (Netherlands). It spent 14.8 days on the NSR traveling at 10 knots. The Yong Sheng departed Busan on August 17 bound for Rotterdam. It recorded the highest average speed of all vessels in 2013, traveling at 14.1 knots and spending just 7.4 days on the NSR. The remaining 11 general cargo vessels, carrying between 120 and 9000 tons, predominately supplied local communities along the Russian coastline. Seven vessels departed from the port of Arkhangelsk bound for either Anabar Bay, Kolymar River and Pevek within the NSR.

Coal deliveries accounted for 5.5 percent of traffic. A single vessel, the Nordic Odyssey, carried 73,500 tons from Vancouver (Canada) to Pori (Finland). The vessel departed Vancouver late in the shipping season on October 4 and did not enter the NSR until October 16. It recorded an average speed of 9.1 knots and sailed for 12.2 days along the NSR. The Odyssey’s journey represented the last major vessel to transit the NSR in 2013. All subsequent vessels constituted either local deliveries of oil products or traveled under ballast. Thus, as a transit route, the NSR shipping season concluded a full month before the last smaller vessels left the route.

LNG accounted for 5 percent of all NSR traffic in 2013. The NSR saw the first transit of a LNG carrier in 2012 when the Ob River carried LNG from Yosu to Montoir (France). In 2013 a single vessel, the Arctic Aurora, carried 66,868 tons of LNG from Hammerfest to Chiba. Despite the fact that the vessel transited the NSR during the month of September, when ice is generally at its lowest extent, it only traveled at an average speed of 7.1 knots and spent more than two weeks on the NSR. The ship departed Hammerfest on September 13 and exited the NSR via Cape Dezhnev on October 6.

In addition to the 49 vessels carrying cargo, 22 ship traveled the NSR unladen and under ballast. Ballasted journeys accounted for 31 percent of the official 71 transits. The vast majority of ballast traffic, 19 out of 22 journeys, traveled the NSR in westward direction and 12 trips arrived in and departed from ports between Murmansk and Pevek.

In contrast to the Suez and Panama Canals, the NSR largely represents a one-way traffic route. After delivering cargo at ports in Europe or Asia few ships make the return voyage either with or without cargo via the NSR. The Propontis was the only large vessel traveling the NSR with cargo in both directions transporting 79,000 tons of naphtha products from Mongstad to Mizushima (Japan) in early August and carrying 109,000 tons of gas oil from Ulsan to Skagen. Two other large vessels, the Nordic Odyssey and the Arctic Aurora returned along the NSR under ballast. Traffic patterns on the NSR differ significantly between east- and westbound transits. In 2013, 40 vessels traveled eastbound carrying 895,000 tons in cargo and 6,000 tons of ballast. In contrast, the 31 westbound vessels carried 460,000 tons of cargo and 500,000 tons of ballast. Oil products made up 65 percent of eastbound volume (cargo + ballast), followed by LNG with 23 percent and iron ore at 7 percent. Only three of 40 vessels transited the NSR under ballast in the easterly direction accounting for 0.1 percent of total volume.
In contrast, ballast accounted for 52 percent of the westbound volume followed by oil products with 31 percent and general cargo at 8 percent. Almost half, 14 of 31 westbound vessels, traveled the NSR without cargo.

The 2013 season saw two distinct peaks in shipping activity. In eastward direction, supplies for local communities, mainly oil products, and two iron ore shipments dominated the first two months of the season, July and August. Unfavorable ice conditions near Severnaya Zemlya and in the East Siberian Sea during the first half of September led to a drop in traffic before a second peak emerged at the end of the month. (Suslin, 2013) September saw another iron ore delivery and the season’s sole LNG shipment. Eastbound traffic largely concluded by the end of October with a few small deliveries of oil products along the Russian coastline. Westbound traffic commenced around July 15, about two weeks after eastbound transits. The first
peak in shipping activity occurred between July 15 and August 15. Almost all volume carried during primarily oil products, general cargo and coal. The westbound shipping season extended until the end of November, however, traffic consisted exclusively of unladen vessels after October 25. The fact that Arctic shipping is subject to the intraseasonal variability of ice conditions represents a key economic obstacle of the NSR. Unfavorable ice conditions between the end of August and the middle of September had a noticeable impact on shipping
activity in 2013. Furthermore, interannual variations of ice conditions will also remain significant. While 51 vessels had transited the NSR by October 1 in 2013, no transits had been recorded by the same date in 2014.

The vast majority of transits, 54 of 71 journeys, originated in Russian ports and those vessels transported 705,000 tons, equal to 52 percent of all cargo. South Korean ports represented the second largest points of departure with four vessels carrying 293,000 tons followed by Norwegian ports with six vessels transporting 208,000 tons. Ports in these three countries accounted for 89 percent of all cargo. The list of destination ports was slightly more diversified. Russian ports were the destination for 48 of the 71 journeys delivering 227,000 tons of cargo. Dutch ports received four vessels carrying a total of 242,000 tons. Ports in China, Japan and South Korea each received three vessels carrying 203,000, 183,000 and 182,000 tons respectively. Together these five countries accounted for 77 percent of all cargo. The lack of diversification, especially in terms of country of origin, is striking. The fact is that the NSR is primarily utilized as a domestic supply and export route for Russia and much less as an international transportation corridor by countries in Europe or Asia. The scatter plot below shows the importance of the NSR as a local supply route for Russian communities. Small vessels, carrying generally less than 20,000 tons of cargo travel along its northern coastline throughout the season delivering diesel and general cargo. More than 300,000 tons of cargo, equal to 23 percent of the total, were transported domestically between Russian ports and never left the country’s Exclusive Economic Zone. Another indicator of the NSR’s limited use as a twoway transit route is the fact that the NSR exhibits a high rate of ballast journeys in comparison to the Panama and Suez Canals.

The NSR remains a niche trade route with limited numbers of true transits and the majority of traffic originates in Russian waters. Only 30 vessels traversed the route with cargo in 2013. East and westbound traffic patterns are distinct and the share of unladen vessels remains high. Ice conditions will continue to have a significant impact on shipping traffic.

1. All figures based on data by the NSR Information Office unless otherwise noted.