Themes and Highlights from the 2013 NRF Open Assembly

Every second year the Northern Research Forum (NRF) holds an Open Assembly aiming to bring together researchers, politicians, educators, business leaders and other stakeholders. These assemblies provide a space and time for discussion and networking across disciplinary and institutional borders. The most recent NRF Open Assembly was held from 22nd – 23th August 2013 in Akureyri, Iceland. The central themes of the conference focused upon territorial challenges arising from the effects of climate change in the Arctic. They invited contributions addressing the territorial socio-economic impacts of climate change, new methodologies for assessing socio-economic impacts, and examples for adaptation strategies responding to climate change in regions and local communities.

The Northern Research Forum has a history of bringing together the arts and the sciences, a priority continued at this year's assembly. This commentary, written by authors from the architectural and artistic fields, has a particular interest in such cross-fertilisation between conventions and disciplines, particularly where such practices can be fruitful in transforming research into action, allowing communication with the greatest audience possible. There were two stand-out highlights from the assembly that pertain to such interests:

The Need to be Interdisciplinary: Working Without Borders

Throughout the conference it was demonstrated that climate change research in the Arctic depends upon interdisciplinary collaboration and knowledge exchange. Projects in this field tend to handle research questions of unprecedented complexity, which necessitates opening up entirely new fields of cross-disciplinary research, expanding the perspectives and parameters surrounding a topic of concern. This kind of research asks for unconventional and experimental approaches, borrowing and adapting methods and data from other scientific and non-scientific fields. It crucially involves the permanent challenge of finding common languages in order to communicate and collaborate between disciplines and stakeholders. The majority of contributions to the 2013 Open Assembly actively embraced such blurring of disciplinary and methodological boundaries. This became apparent through their wide-angled research approaches and presentation formats as well as in how contructively these contributions were taken up and discussed in the plenum from the perspectives of other expert knowledges. The value and benefit of interdisciplinarity was never questioned, and fear of crossing disciplinary boundaries seemed to be absent, despite an acute awareness of its challenges. Instead, the participants of the conference actively invited interdisciplinary discourse and sought to connect and compare their key findings to those of other researchers beyond their own field.

Specialist research projects analyzing and understanding climate change are in abundance, however the application and transfer of their scientific findings into plans for action isdifficult and often neglected. Translating theory into practice was one of the main points on the conference's agenda. A desire to act, to respond to climate change rather than to merely evaluate conditions, was noticeable. This was framed by an awareness of the potential danger of 'falling between two stools': broad overarching frameworks on one side, and localized, concrete engagement on the other side. In order to ensure that these 'top down' and 'bottom up' approaches meet in the middle, and do not eclipse one another, it was reiterated that a shared language, or mode, must be sought that can mediate between the natural sciences, social sciences and local communities. To this end it was mutually thought important to find agreement on terms of evaluation and shared goals, carefully considering the use of rhetorics, images and figures.

The more thematically structured parallel sessions gave opportunity to dive deeper into particular questions currently addressed in highly specialised fields. These specialist findings highlighted areas and issues in need of further discussion, evaluation, and action; tasks possibly to be shared with other disciplines.

Socioeconomic Adaptation in Key Sectors: Law, Education, Health and Tourism Research in the specialist field of Polar Law has brought to light a number of legal blind spots regarding the Arctic and Antarctic - territories that until very recently have been so remote and inaccessible that no legal agreements regarding territorial rights seemed to be necessary. In a warming world this situation is fastly changing, and a number of potentially dangerous territorial conflicts are becoming more likely. Improved legal frameworks are needed regarding fishing rights, the territorial rights of indigenous peoples in the North, future Arctic transport routes, and the distribution of licences for oil and gas exploration in the Arctic. Law specialists are cooperating here with geologists, biologists, community leaders, energy companies, and governments in order to develop legal frameworks supporting a geopolitically and environmentally safe Arctic region for all the involved interest groups.

Current research has pointed out a variety of climate change effects upon human health, including the psychological as well as physical impacts of a changing environment. While it can be difficult to separate climate change effects from other negative effects on human health, such as socioeconomic factors, their close correlation highlights the necessity to look at environmental and socioeconomic conditions in combination, and not separately. Mitigating measures likewise must consider the socioeconomic reality of people in their communities at the same time as the irreversibly changing environmental conditions they live in. The results of climate change related Health research should influence policy making for short- and long-term responses and oblige decision-makers to be more aware of the complexity of indirect health issues arising from adaptation measures such as depression as the consequence of the resettlement of climate change migrants.

International reporting of climate change has increased attention onto tourism in the Arctic regions. Climate change is expected to improve access to previously isolated territories, which is mostly positively viewed since tourism infrastructures could bring much needed income to these formerly very remote communities. Nevertheless, the problematic impacts of larger-scale organized tourism upon Arctic rural communities have also been thematized. The phenomenon of the "climate change tourist" meanwhile is a controversial topic: It may be productive to provide opportunities to experience the effects and places of climate change first-hand. On the other hand the desire to see glaciers and polar bears "before they are gone" does not automatically lead to climate friendly behaviour at home or civil action aiming to prevent those effects that are offered and consumed as a "now or never more" spectacle.

The exploitation of both living and non-living resources – from fish, reindeer, and seals, to water, energy and forests – was comprehensively discussed during the assembly. Some axioms of natural resource research e.g. ecological baselines, geographic specificities, discrete spheres etc. were challenged and a picture emerged of the complexity of natural resource management and response: some adaptation measures can contradict one another and indeed even undermine mitigation efforts. Underlined in many presentations was another essential entanglement – that in this 'Age of Diminishing Returns' it is very difficult to predict how one change in natural resource exploitation will be affected by climatic change as well as by other shifts in natural resource management elsewhere and in other stocks, as feedback mechanisms and uneven and emerging socioeconomic development unfold in unpredictable manners.

In order to address the challenges and opportunities outlined above, an interrogation of what is 'sustainable planning', and how to enable it, was an overarching motive of the assembly, framed by two particular conclusions. Firstly, the dismantling of the local/global dichotomy and an acknowledgement of the multiscalar nature of sustainability was flagged as critical. Rather than focus attention on unpicking and categorizing, drawing lines and frames, there was motivation to see beyond classification and beyond traditional armatures and timescales. Secondly, the notion of uncertainty, of accepting that the future is unpredictable and unknowable, was prevalent. This uncertainty must be taken into account by scientists and researchers. It seems to demand closer communication between those on the ground actively experiencing climatic change in the northern territories and scientists and other professionals who are looking upon the same sites and issues from a distance. Combined these two conclusions – thinking in multiple scales and working with uncertainty – point towards a redefinition of sustainable planning: planning as an ongoing, reiterative, flexible practice rather than a fixed mechanism.

The Open Assembly 2013 was characterised by an open and experimental atmosphere where researchers of all disciplines and experience were invited to freely discuss their work framed only by the indistinct boundary of the circumpolar north. In addition to an Assembly dinner, there was a chance to participate in an organised excursion in the north of Iceland to experience first-hand some of the issues discussed during the conference, specifically the infrastructural and socioeconomic challenges for rural communities in the north. Combined these factors created an inclusive, informal, welcoming environment that is especially valuable for early career scientists and young researchers.

The NRF, the YR programme, and the ENECON ESPON Collaboration

The NRF was launched by Dr.Ólafur Ragnar Grímsson, the President of Iceland, in 1998. Based in Iceland, the forum is led by a steering committee of international senior researchers since 1999. In its function as research platform the NRF cooperates closely with the University of the Arctic. Its discourses bring to light the challenges and the opportunities faced by communities in the Circumpolar North and the Nordic Region. The NRF acts as a platform for international and interdisciplinary exchange of research and experiences concerning topics that are of specific interest for the Nordic countries but also have a distinctly global significance, such as quality of life, sustainable use of natural resources, energy efficiency, governance, human and environmental security, and climate change.

They regularly include a group of Young Researchers from various fields, whose research projects are concerned with Northern issues and the Arctic, and whose often new and unconventional approaches contribute innovatively to the research forum. The Young Researchers program provides travel funding for up to 25 PhD candidates and recent PhD recipients, giving them the opportunity to present their projects at the Open Assembly, where they enter a dialogue with senior researchers, policymakers, and the public, as well as their fellow young researchers. Training Young Researchers to negotiate the interface of science and politics is one of the central objectives of the NRF. The YRs' tasks during the conference include the presentation of their own scientific paper in a plenary session, taking on the role of "rapporteur" on one or more sessions, active participation in the discussions and roundtables throughout the Open Assembly, and a final brief oral statement reflecting their impressions of the conference. The YR's reports, statements, and scientific papers are published in the conference proceedings. This participatory training, with its emphasis on the social and political relevance of science, is thought to be of particular importance in today's climate of global change, which requires new forms of leadership. The NRF Young Researcher program is undertaken in cooperation with the Association of Polar Early Career Scientists (APECS) and the University of the Arctic.

For the first time in 2013 the NRF Open Assembly was held in collaboration with ENECON (Evidence in a Northern European Context), a research network of the Nordic states within the EU programme ESPON (European Observation Network on Territorial Development and Cohesion).

The Executive Committee of the Northern Research Forum, chaired by Dr. Lassi Heininen (University of Lapland, Finland), was in charge of organising the conference.

The next NRF Open Assembly will be held in 2015 – for further information please see http://www.nrf.is. 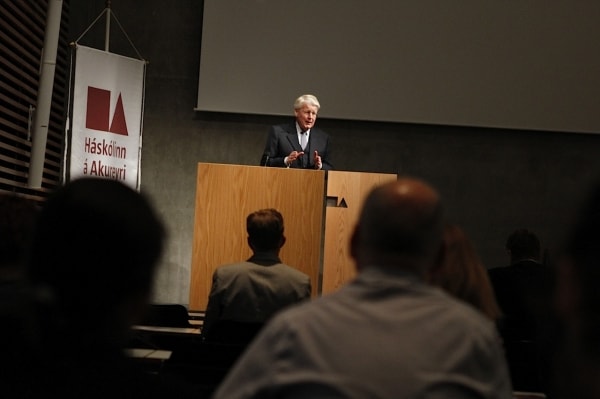 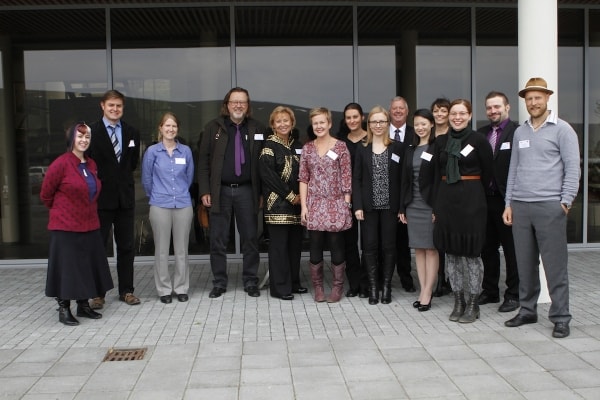 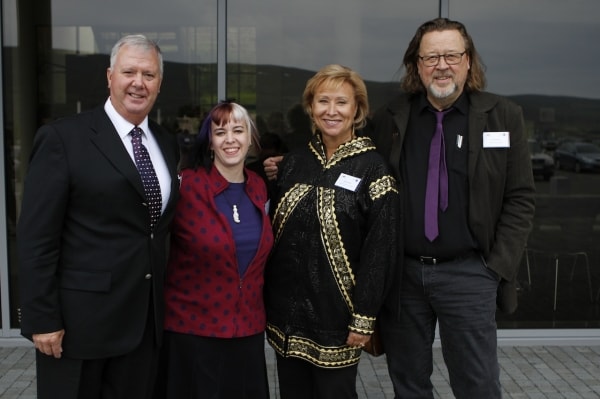 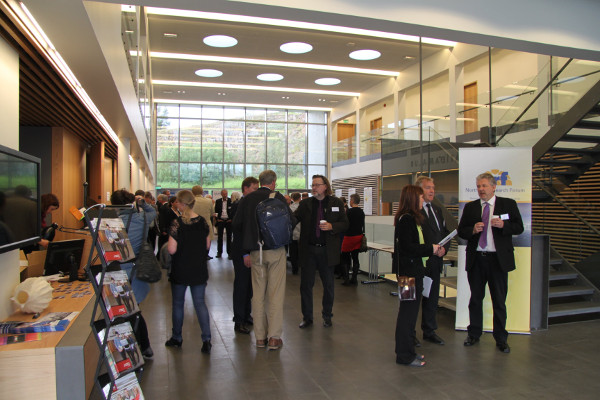 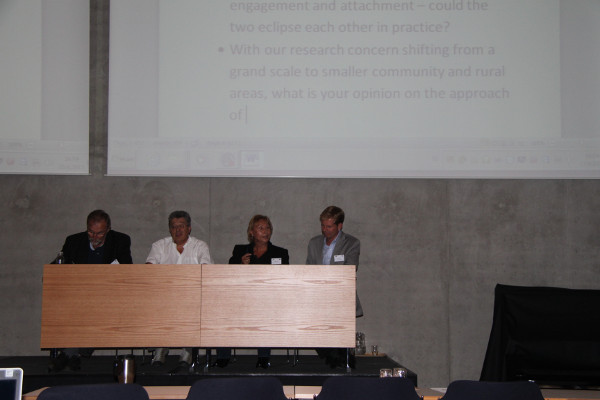 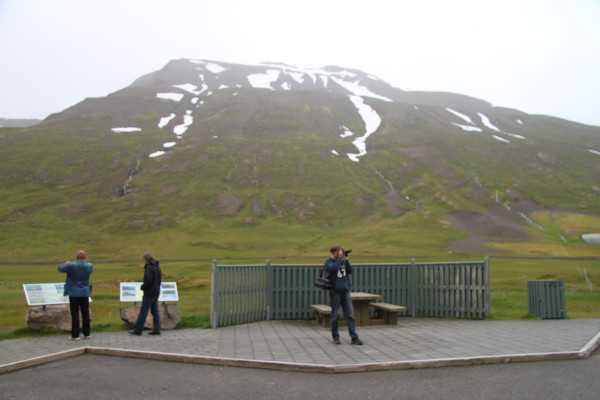