The Sochi 2014 Olympic Torch Relay, which was carried by the Russian icebreaker “50 Years of the Victory”, reached the North Pole on the 19th of October 2013 at 2:37 pm. The Olympic flame was lit in the cauldron at the North Pole during the same day.

An international delegation of the Arctic states brought the Olympic flame to the North Pole as part of the Torch Relay for the XXII Olympic Winter Games and the XI Paralympic Winter Games of 2014 in the City of Sochi. The delegation was led by Arthur Chilingarov, a famous Russian polar explorer and the Special Envoy of President Putin to the Arctic and the Antarctic. It consisted of members who represented scientific communities of the Arctic states, with many of them active in international scientific higher educational cooperation. Among other honorary torchbearers were Professor Elena Kudryashova, Rector of the Northern Arctic Federal University (NArFU), Russia; Dr. Christian Marcussen from Denmark; Dr. Jan-Gunnar Winther, Director of the Norwegian Polar Institute; and Professor Lassi Heininen from the University of Lapland, the chairman of the Northern Research Forum Steering Committee; as well as two Olympic medallists, Pat Pitney from USA and Steve Podborski from Canada. I was invited by the Northern (Arctic) Federal University, NArFU – “…from the list of people who are well-known for their contribution to the development and exploration of the Arctic region”, and the Organizing Committee of the Sochi 2014 Winter Olympic Torch Relay to become a honorary torchbearer, and the representative of my country, of the Torch Relay to the North Pole (see my personal notes in that capacity: http://www.arcticinfo.eu/en/features/90-the-olympic-flame-visited-the-north-pole. 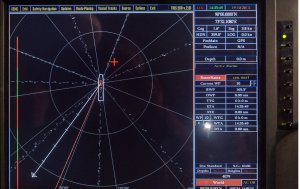 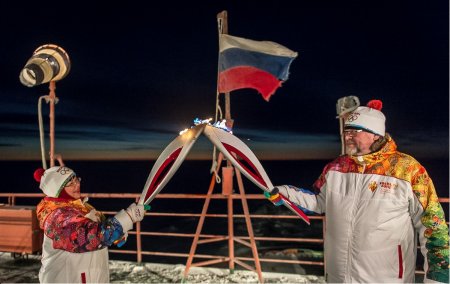 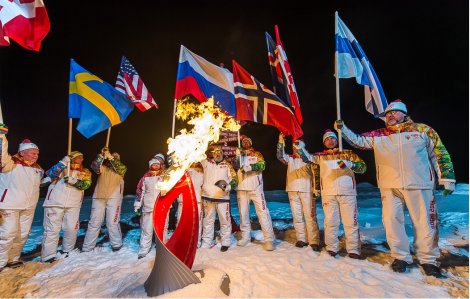 The voyage of the Olympic Torch Relay to the North Pole in October 2013 had a few highlights, and potential political impacts and findings as conclusions. Each of them gives a ground for further discussion and follow-ups, as well as speculations:

First, the October North Pole voyage was one of the four special legs of the Sochi 2014 Olympic Torch Relay – the flame was also brought to outer space, to the top of a high Siberian mountain and to the bottom of the Lake of Baikal – and for the first time the Olympic flame was brought to the North Pole. In international media (e.g. The New York Times on the 19th of December 2013) the Sochi 2014 Olympic Torch Relay has raised speculations of misuses, that the Olympic flame has been relit, or emphasising the nationalistic character of the Russian President and government. Indeed, the Sochi Torch Relay is the largest in the history of Olympic Games with its 14,000 legs and thousands of torchbearers. Also the state territory of the Russian Federation is the largest one in the world. And, the Olympic Games are said to be a universal, and indeed global, festival for the people and nations. Based on my personal experiences I am able to state that the Torch Relay to the North Pole was done according to the spirit and rules of the Olympic Games, and there were neither misuses with the flame nor flags. 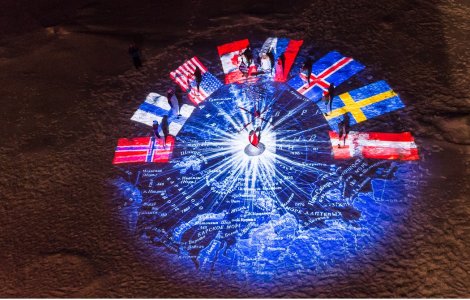 Second, the Torch Relay to the North Pole had a strong representation of the Arctic states. There was an honour torchbearer from each Arctic state with an equal mandate and her/his own flag. The Russian Olympic Committee could, however, have done this part of the Torch Relay nationally by having only Russian torchbearers, with the Russian flag, as was the case with other three special legs of the Torch Relay. Yet, Russians used the October 2013 voyage to the North Pole as an opportunity to showcase the international cooperation between, and common interests of, the eight Arctic states. This was manifested by the colourful flag show, or flag ‘planting’, on the (sea ice of the) North Pole as the grand finale of the Torch Relay. Indeed, with this strong representation of the international community the voyage was also a showcase of the importance of international Arctic cooperation.

Is there a lesson to be learned from the Russian expedition to the (bottom of the) North Pole in August 2007 to retrieve sample sediments, as well as to plant the Russian flag on the sea bottom? Thus, it would be wiser to re-manifest the domiautoce on, or even ‘ownership’ of, the North Pole by having an international delegation on board. Or, is this simply due to the fact that the current Arctic cooperation is both international and institutionalized, but in a new state due to globalization? Whatever the case, the acceptance of several major powers from Asia as observers of the Arctic Council has created a new geopolitical situation, as well as challenges, for the Arctic states, particularly the littoral states. Followed from this they consciously know that they share interests, would like to agree (as much as possible) on Arctic issues, management and goverautoce, and would like to show that there are common ‘house rules’ in the Arctic, as well as the Arctic Council, which newcomers should also respect. Here the Russian Federation is an important actor, and thus the October 2013 voyage to the North Pole can be interpreted to play an important role in the cooperation.

Third, the North Pole Torch Relay was even more: the strong representation of the international Arctic science community strongly shows, even manifests, the interplay between science, (higher) education and sports. This was supported by the series of lectures on the Arctic covering several fields, such as international maritime law, climate change, geopolitics, oceanography by the torchbearers (as a human interest, I was honoured to be the first political scientist having a lecture on geopolitics at the North Pole). This has not been the case earlier with Olympic torch relays. It is more a post-modern than traditional or national approach which reminds me about the niche of the Northern Research Forum and the main design of its Open Assemblies. This is the direction where international, multilateral cooperation in the globalized Arctic is going, or should go, into.

Fourth, this was the first time that the North Pole has been reached in darkness during the long Polar Night, and it is said to be done in a record time. This fact was shared with us in the beginning of the voyage. It was repeated in the end of the voyage by emphasizing the importance of being able to reach the North Pole in darkness. Russia is technically able, unlike any other Arctic state, to navigate in the Arctic Ocean, and now in darkness, and has a rich tradition in that. Behind that are strong Russian national (economic) interests to increase the mass-scale utilization of natural resources in the Russian Arctic Zone and beyond, as well as to promote the infrastructure there. This interest was already clearly indicated by the 2008 Russian state policy and strengthened by the 2013 state policy on the Arctic. This is shown, even manifested, by the just started commercial off-shore oil drilling at the Prirazlomnaya oil field on the continental shelf of the Pechora Sea, south of Novaya Zemlja. I had a chance to visit, together with Russian experts and authorities and a few other foreign academics, on the Prirazlomnaya Off-Shore Oil Platform and the Varandey Oil Export Terminal in August 2014 as a part of the program of the IV International Meeting of High-Level Representatives of the Arctic Council Member States, organized by the Russian Federation Security Board, in Naryan-Mar, Nenets Autonomous Okrug, Russia.

In this context, the voyage to the North Pole can be taken as a manifestation of Russia’s technical capability to be present in, and utilize (off-shore) resources of, the Arctic Ocean area, which makes the Russian position even stronger. It is, however, good to remember that other Arctic states have also prioritized their national interests and have put economic interests on the top of them, as it was discussed in the 2012 Arctic Yearbook. Thus, despite the previous commitments to environmental protection and sustainable development by the Arctic states, and the first legally binding agreement under the auspices of the Arctic Council on cooperation in Aeronautical and Maritime Search and Rescue, which requires better readiness and safer navigation in the Arctic Ocean, (geo)economics and economic interests seem to have taken over (geo)politics and science, as well as environmental protection.

Finally, the voyage showed, and its record speed manifested, the fact that the sea ice of the Arctic Ocean is melting and becoming thinner. If the sea ice is going to melt this fast, there might be no solid multi-year sea ice in near future for activities in a summer time. Then we, the people, and humankind have lost something very special, a part of the beauty of nature. From this point of view the Olympic Torch Relay voyage to the North Pole with its nice pictures and videos can be seen either as a picturesque and extreme excursion; or as an experimental endeavour with international participation and in a new global context; or an ultimate presentation on behalf of the snowy and icy marine Arctic ecosystem. 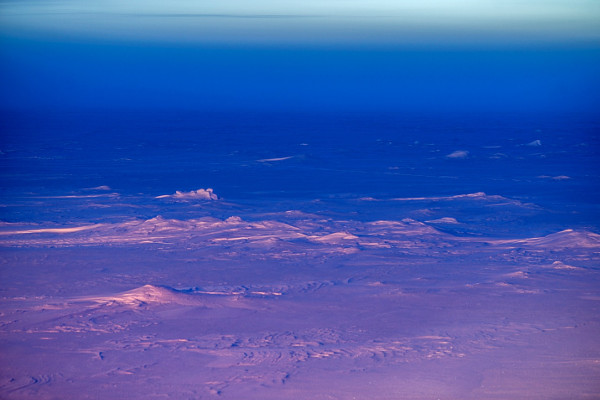 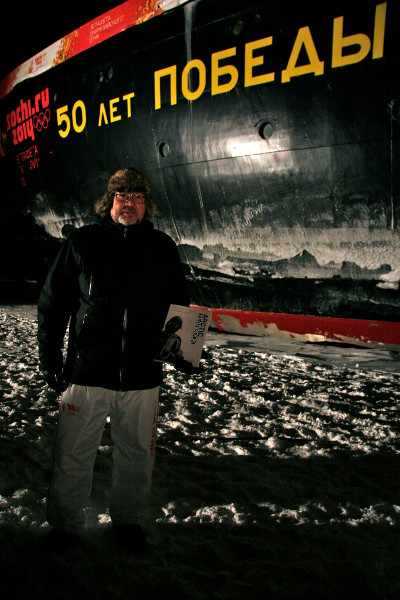