With direct container service to North Atlantic destinations through the Port of Portland and bulk capacity through its ports in Eastport and Searsport, Maine is in a position to capitalize on emerging shipping lanes in the Arctic Sea, which could see the state become a hub of international trade in the Northeast U.S. The Maine Port Authority is preparing for this, putting port and rail improvements in place to facilitate increased throughput.

Located in the Northeast, USA and bordering the Canadian provinces of New Brunswick and Quebec with 5633 km of Atlantic coastline, Maine is well-positioned as a hub for North Atlantic shipping and supply chain activity - with comparable (ocean) shipping fees to domestic and European destinations. With the opening of the Northwest Passage, Maine will be able to offer effective shipping solutions to Canada, Europe and Asia through its ports.

2014 was a pivotal year in Maine’s development of North Atlantic relations. With the advent of Eimskip, Iceland’s largest shipping line moving its U.S. headquarters to Portland Maine in 2013 and the subsequent visit to Maine of The Honorable Ólafur Ragnar Grímsson, President of Iceland, the State opened the Maine North Atlantic Development Office (MENADO) in 2014, to develop increased trade and investment activity between Maine and the North Atlantic Region and organized a number of events and outreach activities to launch this effort.

The passages over the High North are opening and Maine’s ports are ideally situated to play a large role in the future of global trade - Maine needs to participate in Arctic conversations and build relationships throughout the region. This will require a coordinated effort, which MENADO can help lead. Climate change in the Arctic provides both promise and peril and Maine, and the country must prepare for the new opportunities and for the new risks that we will face.

Maine hosted two, major North Atlantic-themed events in Bangor, Maine in 2014. Maine International Trade Day: ‘The New North’, with business intelligence presentations from the Greenlandic and Canadian Governments, as well as panel discussions including businesses and tourism officials from Maine, Atlantic Canada and Iceland. The audience consisted of over 300 of Maine’s most internationally-active businesses with a keen interest to increase trade activity with the region. At a second event, the Maine National Guard, University of Maine's School of Policy and International Affairs and the United States Coast Guard collaborated to present “Leadership in the High North; A political, military, economic and environmental symposium of the Arctic Opening.” General Charles Jacoby, Commander of North American Aerospace Defense Command and U.S. Northern Command headed up an international collection of experts to discuss issues related to trade, changing environmental conditions, and the strategic geopolitical situation in the Arctic. Major General Christopher Coates, Deputy Commander Continental Canadian Joint Operations Command discussed issues specific to the Canadian military and their ongoing operations in the High North. The Maine Port Authority and Iceland’s Eimskip Shipping Line presented current trends and possibilities in trade among North Atlantic nations. The University of Maine's Dr. Paul Mayweski and Rear Admiral Jonathan White, Oceanographer and Navigator of the Navy, and Director of Task Force Climate Change discussed changing environmental conditions in the High North. Representatives from all of the New England states, New York, Alaska, New Brunswick, Quebec, Iceland and Denmark participated in the symposium.

These two events preceded a successful State of Maine trade mission and outreach to Iceland, the UK and Greenland, resulting in projected sales in these markets, as well as the connection of Maine business resources with proposed mining and infrastructure projects in Greenland.

A study released over the summer of 2014 reported that the Gulf of Maine is warming faster than 99% of the world’s oceans.1 This warming is contributing to rising seas, already noticeable along Maine’s coastline and rising sea temperatures are having an effect on Maine’s fisheries. Long established species are heading for colder waters, and species that are unusual for the Gulf of Maine are becoming prolific.

Abrupt climate change, initiated by Arctic ice-melt is impacting the State of Maine and our scientific community has long contributed to the study of Arctic change and is now at the forefront of helping the world understand the impacts this change will bring. Notably, University of Maine’s Climate Change Institute has made major scientific contributions to the understanding of climate science, including research on the role of marine ice sheets and ice streams in rapid deglaciation and sea-level rise, recent change in Antarctica and Greenland, and is now analyzing the global implications of abrupt climate change to climate prediction. The Gulf of Maine Research Institute, University of Maine, Bigelow Laboratory for Ocean Sciences and University of New England’s Marine Science program are all contributing ocean science to record and analyze the impacts of climate change.

Maine has contributions to make to the future of the North Atlantic region, and they will be diverse. We will contribute economic development expertise and competitive logistics solutions, business partnerships, scientific collaborations—and will facilitate Maine-North Atlantic exchanges in the Arts, culture and tourism. Maine’s role in the North Atlantic future is active and growing. 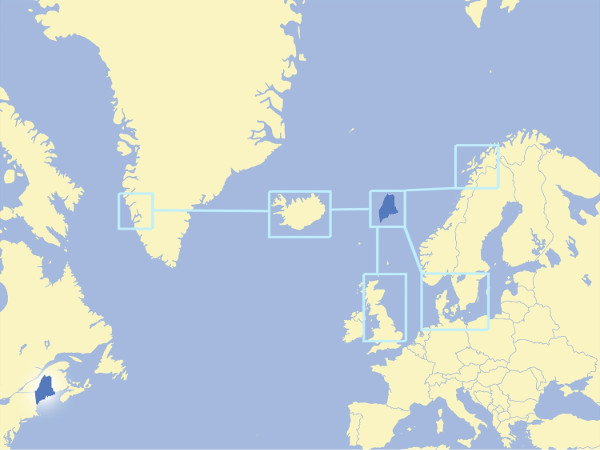